I was describing my family and this is the word I used for my sister, heh. Then realized it applies to the majority of my friends. Todos las personas en mi vida son descaradas. I don’t know if that’s correct, but good news – y’all probably don’t know either. (This would be a perfect spot for an emoji – can you put those in blogs? Is this the millennial in me creeping out?)

Pitaya. Where I’m writing from this afternoon. It was the first place I went when I arrived in Antigua last week. LAST WEEK. It’s crazy to think I’ve already been here for a week. And only blogged twice…oops. The only reason I say oops is because the more days I leave in between posts, the more I have to talk about and the longer the posts are. You’re in for a long one today. Today at Pitaya I ordered a lemonade with mint (limonada con hierbabuena). It just arrived at the table and it is delicious. The mint complements the sweetness of the drink perfectly. I also ordered an oatmeal chocolate cookie…and it is not necessarily what us Americans would consider a cookie. If there were types of cookies like there are pizza, I would call this the thin crust of the cookie family. Essentially, it’s a fine layer of oatmeal, a fine layer of chocolate, and another fine layer of oatmeal to top it off. And it is perfect. I ate it before I could take a picture, so I’ve robbed you all of even seeing what it looks like. Maybe I can place an order to bring a suitcase full back to the States so everyone can truly appreciate said cookie. Side note: owner of Pitaya KNOWS FIVE DIFFERENT LANGUAGES: Dutch, Spanish, English, Mandarin Chinese, and Cantonese. Who are you and why can’t I just learn a second language?

Last week I was able to visit the market in between classes. One of my absolute favorite things about Latin America is the vibrance of the colors that surround you everywhere you go – especially in the markets. The reds emulate a crayon right out of the box. Always. It’s almost as if Crayola should have spruced up the name ‘Red’ with ‘Guatemalan-Tomato-Red’ or something along those lines. Catchy, dontcha think? Hire me, Crayola…I’ll be looking for a job in a couple years. 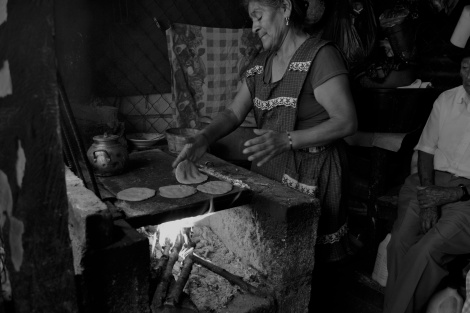 Not only do I feel like I want to take a picture of everything each time I blink, but I also feel like sensory overload has never been more real than with all of the smells here. If it’s not fresh tortillas, it’s the flowers down the walkway, or the scent of mint leaves filling the air. I just wanted to stand there and sniff everything. If they weren’t aware I was a tourist before, they certainly could tell after I looked like some animal sniffing its surroundings.

On the way back to school, I stopped to get mango con pepitoria. Mostly because I don’t walk past anyone selling mango con pepitoria without buying some. Mango dulces, crushed up pumpkin(?) seeds, salt, and orange juice (lemon juice if it’s with mango verde). Don’t knock it ’til you try it. It’s 5 Quetzales, which is 65 cents. My rationale is since I can’t buy anything in the U.S for that cheap, I might as well do it while I’m here. This is an issue because I can probably use that with anything here if I really wanted to.

The weekend gave me a little bit of freedom from the frustration that is a foreign language. Also known as 10 syllables per word and continuous conjugations of verbs. (Overheard at the table next to me: “It’s 3:20, but it’s 4:20 somewhere.” The man just got up and went to the bathroom.) My cousin picked me up around 3 o’clock on Friday and we drove back into the capital where my aunt and uncle live. Word to the wise: if you’re ever in Guatemala and it’s Valentine’s Day, and it happens to fall on a Friday – DON’T DRIVE INTO THE CITY. EVER. Just don’t do it. What normally is a 40-minute drive took us close to 3 hours. And I wouldn’t call it pleasant…remember what I said about driving down i70 without any rules? That’s what I feel like all driving in Guatemala is like. I’m going to channel my inner BuzzFeed writer and give y’all a list of the most terrifying things about driving here (in no particular order, except for #1).

1. People drive drunk. Often.
2. Speed limits are a thing of the past.
3. While you may think that a white line on a road establishes a lane, you are wrong. There is no such thing as a lane.
4. Most cars have heavily tinted windows because it’s not uncommon for a motorcyclist to hold you at gunpoint until you give them your phone. Good.
5. Holy potholes.
6. You think honey badger don’t care? The police in Guatemala actually don’t care. About anything. At all. Unless you have guns.

We made it to my aunt and uncle’s house alive and had a few hours to spare before my cousin took me out to Las Tres Marias, which is a bar in a newer part of the city. I don’t know how many times I said over and over to my cousin “Why aren’t the States like this? Why? Why don’t people dance in the States? Why, why, why?”. Hopefully by the end of my time here I will be able to effectively explain what I mean with all my ‘whys’, but as of yet, I haven’t figured out how to do so. I bought a drink that I’m pretty sure was close to $14, but my cousin bartered (WHAT?) down to $9. As I sit here cringing at the fact I paid $9 for a drink in Guatemala, I decided to Google what this drink consisted of. FYI: a Chiri Doble is Redbull + 7up + 2 small bottles of Octavos Indita. I don’t know what that is and Google isn’t helping.

The rest of the weekend consisted of spending time with friends and family and friends of family and everything that I love most in the world. I have always been one to enjoy the company of others in any setting. I guess it’s the Latin blood that runs through my veins because I think my friends see it more as separation anxiety or something more along those lines. We spent an evening at Lake Amatitlán enjoying delicious food and the magnificent view as the sun set behind the three of the major volcanoes in Guatemala: Volcán de Agua, Acatenango, and Volcán de Fuego. I was in awe…to the point where I considered what it would take to move here. Of course the one time I didn’t bring my camera is when there a view most necessary of a photo out of everywhere I’ve been thus far. I’ll give you an iPhone quality picture that still doesn’t encompass the beauty of the view.

Sunday was spent exploring a bit of Antigua with my cousins and ended with delicious pizza at Chez Christophe. May I suggest La Tropical Pizza with a Chelada next time you’re in Antigua and come across este restaurante. A Chelada is beer, lime juice, and assorted spices served in a chilled, salt-rimmed glass. Buenísimo. 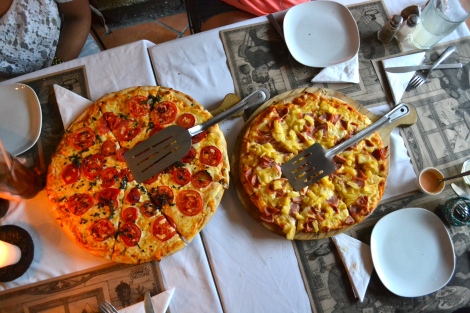 I applaud you if you’re reading the last piece of this post – you’re a trooper. I will leave you with a Gary-ism. Remember Gary? My 65-year-old housemate that is an absolute hoot? I think it’s necessary to start ending every post with one.

“Follow your dreams, it will lead you right off that cliff.”
– Gary