So here we have it, y’all. An update that everyone has been so eagerly been waiting for. If this is your first time stumbling across my blog, check out my post Here’s To You, Mom…this will all make a lot more sense. Essentially: mom was adopted, mom didn’t know, mom has twin, twin found mom. I promise you the previous blog post is a little better than that synopsis though so you should probably skim through it.

About a month ago, I was so fortunately connected with another blogger, Christine. After exchanging a few emails, I was incredibly honored to be featured on her blog Project Light to Life. Christine prides herself on creating a community within the web that focuses on kind acts and inspirational stories from across the globe. I was asked to contribute to her blog as an ‘Inspirational Guest Post‘ with an update on my mom’s story. The post you’re about to read was originally posted there, updated with a few photos and wording adjustments here on my own blog.

Now, don’t shoot the messenger – I wasn’t there to use a snazzy camera and the photos are that of iphoneography/the cutest mom selfies ever, hence might not be superb quality, but you won’t be disappointed.

Read on and enjoy!

Full disclosure: it took me almost 2 months to sit down with my mom and get the full story on how the reunion went. For whatever reason I thought if we set out a time to go get dinner and have this lavish evening with all the words, it would make the experience seem even more grandiose than it already was. Turns out a night on the couch with a replay of Young and the Restless murmuring in the background was all I really needed to soak it all in.

Surprisingly, after everything was said and done and my ears had finally been graced with the story I was so eager to hear, I came to the realization that I had been listening to so much more than just a narration of a set of twins reunited. I had been receiving little reminders to embrace every curve ball that is thrown our way. So, rather than boring you all with every detail of what my mom ate while she was in Europe and how many trinkets/nail files made of Czech crystal she came home with, I decided to focus on what my mother walked away with from this reunion and the beauty she showered me with as she recalled it all sitting on a couch in the middle of America.

Mom and her cousin/childhood friend Zuzana.

Mom and her new niece/family.

Mom and Dagmar exploring the city after they met for the first time.

The initial reunion (from what I inferred) was everything you might be imagining it to be: my mom waiting eagerly in a café until a woman who looked identical to her started running toward her with tears streaming down her face and a determined translator trailing close behind. My mom told me that throughout the entire meeting day she was still half convinced this wasn’t her sister, that somehow, this was all fake. She giggled as she told me this, but I know there was a serious undertone to that somewhat naïve comment – although, if it were me, I think I would be stuck staring at her until I could prove the genetics one way or another! The language barrier was tough, but from the sounds of it, I don’t think it was any harder than practicing self-control with the breadbaskets offered at every restaurant table.

At this point in the conversation I so eagerly wanted her to recite every detail down to the type of carvings in each bridge she crossed over. The more I tried to pry the swatches of the flowers and shapes of the architecture out into the air, the more my mom spoke about the feeling of struggle with a language barrier and the sensation of living 57 years of a completely separate life than one of your own sister, let alone twin. What was interesting to me, though, was that throughout most of this conversation my mother wasn’t speaking about herself – she was speaking about her sister. (Interesting, but not surprising – if you don’t know her, my mom is one of the most selfless people you will ever meet.) She talked about how much joy she felt knowing that Dagmar’s wish was fulfilled and that she not only found my mom after a lifetime of searching, but the unthinkable happened and they were able to meet. She spoke of how outlandish, yet incredibly easy it was to care so much about a person she had just met.

My mom only spent one full day alone with her sister, but she was grinning from ear to ear as she spoke of that day (maybe with a few salty tears rolling down her cheek every now and then…). She told me how beautiful it was to just be in Dagmar’s presence and feel comfortable with this woman she had never once met before; how blissful it was to be walking down the cobblestoned streets of Prague hand-in-hand with this identical being she now knew as her sister. They didn’t speak about the past, because there is nothing they could have fixed – nothing they could have changed to make this moment any different. Hearing my mom say this to me spoke volumes to the amount of growth that had happened within her heart. Her ability to let go of the unanswered questions and embrace the ‘now’ is something that I think allowed her to essentially find peace with the entire situation.

One last photo after my mom ran into the train for a quick hug! 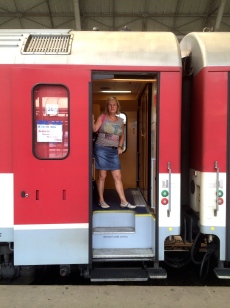 Saying goodbye to her sister.

A selfie at the train station.

When my mother described saying goodbye to Dagmar at the train station, I almost felt like she was parting with a piece of herself. Chuckling and holding back the waterworks, she told me how she ran into the train before it was about to depart because she wanted to give her sister one last hug hug.

“I never could have imagined how much it is humanly possible to miss someone after spending just four days with her,”

she let out after a long pause. It is obvious my mom yearns for the day she can see her sister again and I can only hope that I will be right by her side the next time around. 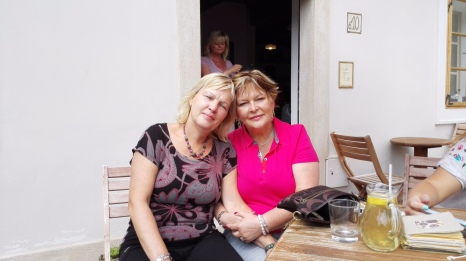 If you take anything from this story let it be a reminder to not dwell on the past, to put others’ joy before your own, and to find beauty in the chaos that we call life. If you’re able to do those three things you’ll find yourself radiating a much more positive outlook and periodically reminding yourself that in the end, sometimes the storms you’re fighting through now may expose their own rainbows 57 years down the road…trust me, I’ve seen in happen in the most beautiful way.